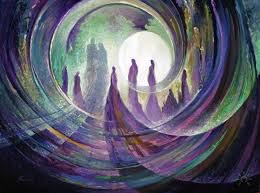 My first ever encounter began within a dream. My dream took a weird turn. I found myself in a room, in a little single bed, more like a stretcher. Suddenly the end legs collapsed and the foot of the bed crashed to the floor, giving me a fright. I realized (lucid dreaming) that this wasn’t my dream anymore, that I needed to wake up NOW because something wasn’t right in my actual bedroom.

I woke and lay there in the dark trying to figure out what was going on in my weird dream. I was lying on my side, legs curled up. My legs were tired of that position so I stretched y legs out straight…

Only my legs didn’t move. “Huh that’s weird” thinks I. I tried again. Still they didn’t move. I was beginning to wake up now. Too many things weren’t making any sense. My awareness was stepping in and I my brain was waking up. I stretched my hand down and checked the muscles at the backs of my knees- yes, my muscles were engaged and trying to push down. What the hell? What on earth was stopping them from stretching? And slowly I realised…

I sat up in bed on my elbow, trying to see what was there. Nothing…

She waited long enough for me to be fully awake ad fully aware of her presence. Then she stood, and with a swish of her long skirts she turned, she took three purposeful strides…

And she walked straight through my door.

The details of this night are firmly and permanently tattooed on my brain. This night was such a turning point for me I’ve recounted the events over and over again. They are as fresh and real to me now as if it happened a few nights ago, not in 1993!!

Only the fear is gone. No, not fear. That night I was absolutely petrified. I lay frozen in fear!! Every hair on my body was standing up! My eyes were wide open. I have never ever been so very scared in all my life!! I had never encountered anything like it.

I lay there in shock, shaking and unable to breathe. I waited long enough for the adrenalin to kick in then I sprung from my bed and turned on every light I had!! But it didn’t help. I was NEVER going to sleep in that room again!! EVER! I ended up sneaking in to bed with my girlfriend but didn’t tell her my story until the morning, when the light of day had come to banish her back into the shadows.

That first encounter became regular feature of the flat I lived in with 4 others. We all had our own frightening tales to tell. This earthbound was intent on scaring us so we respected her house and her rules!

I was 20 years old, in my last year of university. I was young. I had no idea of anything spiritual. I had had no interest up until that point. Then began my crash course in spirit wrangling!

The Slamming Door
This earthbound spirit used every trick to gain attention and make sure we all knew who was boss! It became common to see objects sliding along mantle pieces, feel clothing being pinched, curtains billowing into shapes, hear walking that passed through solid walls and doors, not to mention the transparent form gliding above their beds at night or the front door slamming violently over and over, night after night.

In the wee small hours of the morning, someone was slamming the door so violently the whole house shook! It would go on and on, enough to wake my girlfriend and I, as our bedrooms were on either side of the door, but not enough to force us out of our warm beds to confront the perpetrator.

We had been blaming the difficult housemate for the slamming door. We thought he was just being a pain! It took months for us to actually remember to ask the housemate to stop and discover it wasn’t him! After that whenever it happened we knew it was our earthbound spirit.

But why? Why did she feel a compulsion to go to the door over and over, night after night, and slam it violently over and again? Was she reliving her last moments alive perhaps? Was she trying to make sense of this final encounter at her front door? Or was she just trying to scare the crap out of us with her obvious strength of will?! She certainly accomplished it!

She never opened up to me. She refused to speak to me so I’ll never know her story and why she chose to stay in the house, terrorising its unsuspecting occupants, year after year!

This was the beginning of an amazing learning curve: being taught by Spirit for Spirit how to perceive and communicate with them: to see them, to hear their messages and to feel what they felt.

This was my entrance to communicating with Spirit. I didn’t have a mentor or teacher to gently guide me into the amazing world of spirit communication…I was thrown in the deep end! I was taught by Spirit for Spirit. She was my first and greatest teacher. She set me on a very new and bizarre trajectory I still follow today.

From then on, where ever I was in the world I had half a dozen earthbound spirits waiting by my bedside every night. I lost all fear of them. I saw them and gradually learned that they needed a kind of spiritual counselling.

Do you have your own stories? Please share your experiences in the comments.

Stay tuned for the next instalment – when I share what all of this meant and how it catapulted my life in a radical new direction!