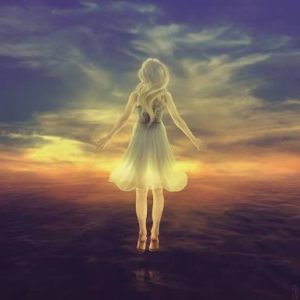 When I experienced my first earthbound spirit (aka. ghost) I was frozen with fear. You can’t begin to imagine how frightening it was!!! But with time, over the course of a year living with the rather persistent poltergeist, something shifted in me. It became normal.

Sparks flying out of my stereo, things moving on my mantle piece, things blowing around as if by wind, being prodded and even that visceral sensation of being watched by someone a few steps away. It all became normal.

I can’t say I was ever not scared of her! But I knew without a shadow of a doubt that she was real, that earthbound spirits were very real.

So, then I moved house and on the very first day, vacuuming the place out after the previous tenants and someone first screams in my ear – I’m talking full volume from inches away – then slaps my butt! I jumped a mile!! But I wasn’t surprised. I knew they knew I was open. They knew I could hear them, see them but most importantly I wasn’t afraid of them. They were normal.

They were a person without a body. Big deal. Move on. I’m not impressed.

When I say “I learned from Spirit for Spirit” I mean it literally not metaphorically! When I was 20, I moved into a share house with a very active poltergeist. Within the year I had activated all my intuitive gifts.

What started out as self-preservation turned out to be the greatest learning – direct from Spirit.

Over the years, I was able to ascertain what they needed me for. It took trial and error. Yes of course there were times when I thought I must be clinically insane!! I don’t remember anyone striking up a conversation over breakfast about the number of earthbound spirits that rocked up to their bedside that night! But for me it happened so regularly day after day, year after year, that it became normal.

I discovered earthbound spirits weren’t just arriving to scare me. They were seeking my help. They needed me to tell them what was happening to them. They were confused, lost and frustrated by everyone ignoring them all the time!

Somehow, I had a sign hanging over my head – I can see you! And they flocked to me. It didn’t matter where I was in the world they would come like a moth to the flame. Some would seek my light, trying to enter my physical body (through my back heart chakra) as I slept. It took some convincing that they were going for the wrong light! The earthbound spirit just needed to be redirected towards the tunnel of light accessible if they only saw it!

I went years attracting earthbound spirits wherever I went, country to country. Each night I would sit and have gentle, loving conversations with the lost and confused souls seated next to me.

Attracting Earthbound Spirits
Some rescues were more successful than others. Some just needed to recall those last moments of their life to know they were dead. Then something would relax within them and they’d be free to see the light and their loved ones waiting for them.

Others mistook me for the tunnel of light. These ones were trickier to convince – they were so sure they’d ‘seen the light!’

I remember one incident in India, in a guesthouse near the banks of the Man Sagar Lake at Jaipur. It was hot so I had the portable fan whirring away beside the bed. But it felt like every time I nodded off my body jolted me awake. It went on and on. As soon as I’d drift into sleep my body would jolt awake- heart racing, adrenalin kicked in as if I was under attack. I was tired. I was a bit slow on the uptake. It took ages for me to realise what was going on…

I was not alone. I had an earthbound spirit in the room. So I resisted the desire to drift and lay there alert. I waited. Just as my body relaxed towards sleep I felt an earthbound attempting to enter my body through my back heart chakra. It was like being hit on the back, right between the shoulder blades! My aura was being invaded. My heart raced, adrenalin kicked in.

I lay on my back, protecting the entry point. I tried to reason with this little Indian man, who was obviously rather attracted to the light shining out of my back heart chakra. But he was insistent. He refused to listen. He was going in there. I ended up holding a very wakeful vigil until I was so tired I gave up and moved to the room of my ex. Then this little Indian man switched to him! My ex felt paralysed and unable to move or speak, trying to refuse this earthbound spirit’s attacks. It was a very long night!

Other times they’d come, bewildered and bemused, to sit at my bedside. It would be a case of spiritual counselling, to gently ease them into a new awareness of their circumstance.

I would ask them who they are, their story. When they were ready I would gently explain they didn’t have a body anymore, that they were dead already.

This took so much love to convey their soul state so they didn’t become shocked and upset. It’s a lot to take in!

When they saw their loved ones their faces suddenly lit up and their hands rose spontaneously. Then I would tell them to look for the light, to enter the light together with their loved ones. Sometimes I would witness them walking into the light. Other times they would just dissolve and be no more. Always there’d be a profound peace and the room would feel empty.

Some really must take gleeful pleasure out of scaring us poor mortals! Ratbags!

Do you attract earthbound spirits? Do you feel fascinated by this work? Is it something you’d like to learn more about? Please share your experiences in the comments.