I was approached recently by a woman for a session. She wasn’t sure what she needed as she wasn’t sure what was going on. This client, Maggie, had been having ongoing paranormal activity for about 9 years! She’s been generous enough to share her story with you all, having read this blog and agreeing to everything that’s been written.

Despite asking many people, none had been able to tell her what it is or isn’t. Maggie described the activity as kinetic that came and went. She was unsure whether it was malevolent or benevolent. Sometimes the activity was protective and sometimes destructive, making her wonder whether there were many.

Through emails, Maggie’s story began to unfold. In 2008 she and her family had “endured about 8 months of intense activity in the house. Furniture was spontaneously broken, huge crashing noises, smoke detectors sounding in odd ways at odd times, and this horrible oppressive feeling in the house.” Wow this was getting interesting! That’s one very talented soul (or souls) who has gained some pretty impressive poltergeist techniques to scare and intimidate. 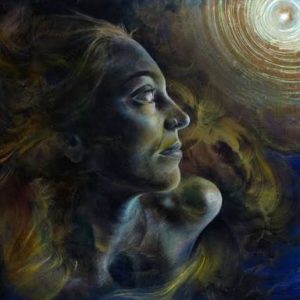 Eventually, the energy started to feel really menacing, which is when she called in a person to clean the house. Maggie attempted to confront the source of the energy, using her most adamant and protective formidable energy. It seemed to backfire. After the house was cleaned the malicious energy was gone and seemed to stay gone but Maggie believed that the mischievous energy remained but only attached to her. It has been this way since 2008. Even when Maggie has moved or taken a vacation it has stayed with her.

Most people would feel like they were going crazy! Maggie was intuitive and sensitive enough to understand it was an external source and wasn’t just a figment of her imagination. What was most significant was that it interfered with her attempts to rebuild her life and career “in terrible ways”. She noted “It can be interesting or wildly destructive, either of my path or of physical things, but not menacing, per se. I’ve spent years trying to understand the source of this activity. I’m a little worried that this connection will be obstructed by whatever it is.”

Maggie was resigned to the constant interference until a couple of weeks ago when something she’d needed for an appointment went missing “almost in front of my eyes (I dropped it between my knees onto the floor at my feet and when I bent down to retrieve it, it was gone) and I missed the appointment.” This was the last straw for Maggie and motivated her to ask for help again.

An Astral Entity Clearing is beneficial for both you and the entities involved. We are all soul, all Beings of Love and light- some just need more help than others to find their way home. An Astral Entity Clearing is a wondrous and powerful healing that enables a lost soul to be reunited with Source, to continue it’s transmigration to it’s next right place of expression.

Even when an entity is wreaking havoc and sounds scary and fearsome (like this one!) I always go in with the same intention – to treat them as lost and confused souls who need to be seen, heard and acknowledged. Some need to be blasted with love so all the shields, that tough scary exterior, just falls away. To her credit, Maggie never spoke of psychic attack or using language that suggested fear of something sinister out to get her. I imagine it felt like that often but she had a strong sense of self that made it harder to feel ‘attacked’ and needing to be defended or saved.

This session was jinxed from the start, to the point where Maggie almost gave up and decided she couldn’t persevere! Despite being pretty good with technology, Maggie ran into online interference and obstacles to setting up a Skype or Messenger account that we could have our session with. Her experience in the past was that these blocks tended to be impenetrable.

She ran into this more often when attempting to communicate with someone who can help her eliminate this energy. This entity (or entities) were either highly protective of Maggie or defending their attachment to her, and skilled at distorting and interfering with technology to get their way! Any reasonable person would have felt like they were mentally unhinged with all of this going on in their life so regularly.

In preparation, I gave her words and prayers to say just so we could have the session. I didn’t feel any fear so I guessed that this tactic will have an affect and wouldn’t exacerbate the situation. We didn’t want to upset the entity and make them go on the defensive but then again, Maggie didn’t need to put up with this a moment longer! These words served as a clear shift in her tolerance levels.

It’s funny what we can put up with! It’s funny how something that’s annoying can become normal if it persists long enough. And then one day you are ready to shout “ENOUGH! This ends now. This has gone in too long. This behaviour is unacceptable! I will not tolerate your interference in my life. You do NOT have my permission. You do NOT impose on me and my sovereign right Stop it NOW!” By putting her foot down and using the clear conviction of intent, Meg put them on notice.

I have to admit I was thoroughly intrigued by now and was really looking forward to the Astral Entity Clearing session. It is always a mystery unfolding for me too!

The first entity that announced her presence was an aunt of Maggie’s. This isn’t unusual – a soul will look for the most familiar, most comforting people first before looking further afield. This aunt was attracted to Maggie because she felt like a kindred spirit. She was there to protect Maggie, to teach her that she deserved to be protected, and to teach her love and care. This aunt said that Maggie needed to be more accepting to receive this love and care rather than just being of service to others.

The next was a male, who Maggie also recognised as a lover and friend from the past, Henry. Henry was attracted to her because he’s been trying to fix her up with his brother. He worried about his brother. She needed the confirmation that he was there because he loved women in a beautiful affirming loving way. He wanted her to know that. He died after suffering for about 20 years of addiction and confusion. Henry put others in harm’s way and felt bad. He trusted Maggie. He’s here to teach Meg that she was loveable. He needed her more than she needed him.

Finally, Maggie was drawn to two souls together who she easily identified as her grandfather (who died before she was born) and her father. Her father had suffered post war PTSD that had not been well regulated and so he’d been scary to be around as a child.

Now he was ashamed of himself because he hadn’t known how to control himself in life. He hadn’t known what was wrong with him and hadn’t known what to do. He was proud of being a good soldier but not of how he behaved afterwards. Maggie’s father was there to tell her how much he loved all his children, and that he couldn’t express this in life.

After the clearing, Maggie had three days of increased “obnoxious activity”- her television went on by itself one morning. She felt her aunt, father and grandfather had all passed, but that her ex-lover and there were two other unidentified souls present we hadn’t spoken directly to, hence the residual activity. Then around day three, she felt a shift and it seemed that the unidentified souls also departed.

Maggie described: “Life has become easier and I have really noticed that my thought process is significantly clearer. Organization and execution is much smoother…

The hardest thing I had to do was let Henry go. I pretty much sobbed every time I thought of him for about two weeks. It was very surprising for me. There was this intense grief for him, his life ending sooner than it should and seemingly without a clear purpose because of his addiction, and the end of my youth and that first real important love. Then one day, he indicated to me that he had done for me what he wanted to do, opening my heart to the possibility of new love and purpose. Then in my minds eye, he turned around and walked away. And I haven’t wept since.

Life is currently quieter and simpler at the moment. I don’t feel as if I am going to get sick again any time soon. I think that I will have just the normal obstacles and challenges.”

That’s such a great outcome! It’s great that interference has reduced and she’s made peace with these souls…especially Henry. It’s so beautiful that she’s been able (and willing!) to assist him to finally cross over fully. It sounds like it was deeply healing on both sides. That’s the ideal; to assist these souls to transition to their next right place of expression and freeing the person up to have all of their energy where they see fit.