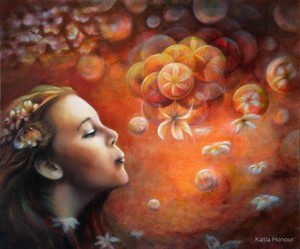 “There’s a whole energetic world that surrounds us that is teeming with life and is vaster, more complex, and more ancient than the physical world with which we are so identified. The energies and entities of this unseen world impinge on and influence our world in countless ways. Many of our human problems come from nonrecognition of this elemental realm, but our connection can be restored. A union with the world of the elemental spirits and powers is unsurpassed as a key to restoring balance in our world.” ‘Soul on Fire’ by Peter Calhoun

The four elements of earth, air, fire and water are forces that can be experienced both in our inner and outer worlds. Earth is the element of power to ground and manifest in the physical world. Air is the element of freedom of movement and expansion, and rules the mental realm. Fire is the element of activity, transmutation and change, our passions and inspiration. Water is the element of dreaming, memory and the past, feelings and intuition. Each element has spirits that can be communicated to – water spirits that cause rain during drought, fire spirits to bring new life and restoration, and earth elementals to seek grounding and connection within the physical environment. This is not a case of personifying an element, but accepting that everything in nature has a consciousness that can be communicated with.

Weather has a function. Storms serve to replenish the land with water and cleanse and recharge the electromagnetic field of the earth. The energy of thunder and lightning helps to neutralise the negativity built up in the subtle atmosphere. We are guilty of contributing to this negativity through our thoughts, feelings and behaviour. Our negativity pollutes the atmosphere around us, perpetuating a sense of negativity. It makes us feel despondent, powerless, lethargic and even depressed. Often the weather can cause the atmosphere to become oppressive. In the tropics of the Australian Northern Territory the buildup before the wet season turns people “tropo” where people act in uncharacteristic ways. Stories abound of people feeling the compulsion to take off all their clothing in public and run around naked or crawl up the hot sealed roads on all fours! Drought not only affects the environment but also the people living there. Droughts cause a spike in depression and suicide along with the desolation of the land. Wind is known to cause people, especially children, to be more spirited and loud, behaving in unexpected ways.

Native Americans are acutely aware of their connection and relationship and held rain ceremonies to assist the environment. Shamans of all cultures sought to appease Nature Elementals with offerings. Shamans were often called upon to restore balance or to intercede on behalf of their community with the unseen spiritual forces of the natural world. This was a mutually beneficial relationship with the elementals. Shamans felt a deep and abiding respect and a desire for a natural balance to be retained for the benefit of all. Elementals were feared and only called upon when absolutely necessary. Shamans exercised discretion and discernment so as not to invoke or displease energies beyond their control, wrecking havoc in extreme weather events such as floods. Unless you are a Shaman and have been trained you may inadvertently turn on a tap you can’t turn off.

Tibetan Buddhists have the power to affect the weather and communicate directly with the forces of earth, air, fire and water. I say this not from academic anecdotes but through two unexplained incidences. When travelling in my twenties I spent time in Nepal. My friend and I wished to walk the Langtang Track – a spectacular hike through the foothills of the Himalayas to an altitude of 3800m. Before we left we were invited to meet a local Tibetan Lama in Kathmandu. This beautiful man was very gentle with us poor ignorant Westerners. When he heard our hiking plans he gave us some frankincense to burn if the weather deteriorated. On day 2 of our hike, my friend and I were sitting having our breakfast cup of tea on the little balcony of the tiny one room house of the villager who had given us a bed for the night. From the balcony we could see down the plunging dirt path we had climbed the day before. It had been a long climb and as we stared down the mountain path we could see dark clouds gathering. We watched nervously as the storm clouds sped towards us, knowing it was going to be a long, wet, miserable day’s hike. Remembering the Lama’s promise, we took out the chunk of frankincense about the size of a thumb nail and the colour and consistency of dried tree gum. We did as instructed and set it on fire, with the request that the weather not come up any further and spoil our day. To our amazement we watched the storm clouds stop! We watched them reverse! We watch them slip back down the mountainside from whence they came! My friend and I were shocked and were convinced that what we had witnessed was no natural phenomenon.

This experience made my friend and I remember another experience the previous year, also with a Tibetan Buddhist. This was while in south western China on the border between Yunan and Schezuan provinces. We discovered an incredible emerald lake called Lugu Hu. Despite the language barrier we were invited to stay in the nearby village and soon realised that we’d stumbled into a Tibetan matriarchal community! We also visited the local Buddhist temple a few hours walk from the village through fields of sunflowers and met a lovely old monk. He took an instant liking to us, showed us around and took us up close to the ancient two story Buddha. Again, without a shared language we bid our goodbyes and explained that it was time to go beyond the temple walls to put up our tent for the night. Suddenly he became animated and asked a young monk to translate, telling us that there was a big storm coming and that it wouldn’t be safe to camp out. We looked at the sky. It was blue as far as the eye could see. Confused we weren’t sure whether to believe the old monk or not. I will never forget the look of concern on the old monk’s face as he waved goodbye at the temple gate. Regardless, we had nowhere else to go to stay so we took our chances and pitched our tent, using all the guide poles and tying it down as securely as we could. Before the tent was even up we could see the storm gathering on the far horizon and by the time we’d crawled into our sleeping bags the wind was already buffeting the tent sideways. We could hear the thunder and lightning drawing nearer and nearer and the wind became downright scary. By the time the storm was almost upon us we were literally screaming in fear. Then suddenly something happened. We could feel a change. As if by some freakish magic the storm stopped. The storm reversed. And the storm headed off in a different direction! We were so relieved but had no idea what had occurred or why until a year later.

I have yet to meet and communicate with Nature Elementals as I have not had the opportunity or invitation to so I have yet to feel drawn into relationship with them. Perhaps this is the fallout from my inner city life. However, for my 12 year old son this is not the case. I read a few sentences about the wind in ‘Soul on Fire’ by Peter Calhoun to my son. It thrilled Jesse with possibilities only a 12 year old boy could conceive. He experimented the very next day on his way home from school. With absolute faith in his ability to communicate directly with Wind Jesse requested that he be blown all the way home from school. Afterwards he excitedly described how a tail wind blew him at speed, whipping him down the street almost faster than he could walk! He described people to his side feeling the peripheral breeze, with their hair whipping across their face! He was adamant he had called Wind and Wind had been his ally, scudding him home. Jesse believes there was no wind except for the wind that propelled him home!

Nature Elementals can be an ally in any and all atmospheric or natural disturbance. As with all spirit, we can develop a bond with these Nature Spirits if given the time and effort to connect with them. They are not to be toyed with however, so always approach with a humble heart and loving intent that it be for the benefit and the highest and best good of all.

Do you have stories? If you have been blessed with encounters with Elementals I would love to hear your experiences. This intrigues me and I would truly value your input!

Posted in Elementals and Fae