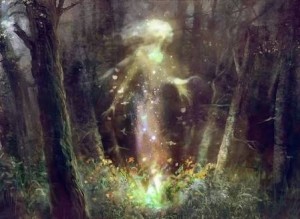 “The Elementals are not properly spirits, because they have flesh, blood and bones; they live and propagate offspring; they eat and talk, act and sleep. They are beings occupying a space between men and spirits, resembling men and women in their organization and form and resembling spirits in the rapidity of their locomotion.” Paracelsus (1493-1541)

Faeries are in many ways Elementals but are fully sentient beings with personalities and individuality. Faeries can function as elementals but they are not like the raw energy of elementals. Faeries are thinking and feeling creatures. They will be overjoyed to have a human take an interest in them.

Faeries are a life form residing in a parallel dimension, the astral plane, but are capable of transcending and travelling temporarily to other dimensions. When faeries descend into the material world they manifest in a physical form within the boundaries of the realm into which they manifest.

Faeries live long lives (400-1000 years). Faeries are very sensitive beings who grieve for their lost loved ones. Their feelings are hurt easily and they need to treated with respect. Faeries love nature, music, hunting, dancing, games of skill and horses. They find humans peculiar, perplexing creatures and enjoy teasing and spying in order to understand humans better. They are protective of the physical world of the living, breathing natural world they love. Our disrespect and misuse of nature angers them manifesting in pranks and distrust.

My Encounters
I have encountered many faeries mainly on the astral plane while researching on behalf of clients. In some instances I have met faeries as Spirit Guides. This gave me the opportunity to ask questions and get to know them in greater detail. The first thing that struck me is their dislike of the term faery! They do not like to be clumped together under this term. As far as they are concerned they are all different species and cannot be categorised together. Each fae has given me their type so I can look it up. I’ve met elves, pixies, sylphs and sprites.

I can tell that I’m not meeting a human soul immediately. The fae have an ethereal quality about them with robes waving as if in water and hair streaming out behind them.

One Spirit Guide described herself as a “will-o’-the-wisp”and a “Sylph”. She was very thin and pixie-like. She had long, shining blond hair and long, lanky limbs. She had the look and dress of a faery-typed female, without the wings. She described herself as a woodland creature. She had long tapering fingers that made me think she was artistic or creative. She showed me drawing with great concentration – her tongue out the side of her mouth! She had a mischievous streak but not a bad bone in her body. It was always innocent fun. She was “here to lighten things up”. This guide didn’t use words, but communicated through movement. She motivated her person by physically moving her body for her as if she was on autopilot.

Another Spirit Guide was childlike with very old, wise eyes. There was a distinct disparity between her physical youthfulness and the age of her soul. She was playing with stereotypes and suppositions. She was very thin with a long, fine, pointy pixie face. She had long straggly flaxen hair with a pale, fair complexion. She had long skinny arms that she played with in front of me. Her movements were the delicate, lithe, poetic gestures of a dancer.

She wished to explore self-expression through movement, communication without words. This guide believed that she could communicate more powerfully with greater depth of meaning through different avenues other than language. This guide chose to be a spirit guide in order to practice and study different ways to communicate from what she was used to. She was experimenting and it was a learning curve for her as well. She gave “seed information” that she explained as her giving the seed of an idea but it was entirely up to the person where their thoughts led them to.

Another described herself as a nature spirit, a sprite. She had long blond flowing hair and piercing blue eyes. She sees through the veil and can access you in the forest. This sprite likes to dwell around old trees that are rotting on the forest floor. The older the better. It is as if they are seeding their wisdom back into the air and ground around them as they slowly shed their physical form. She is standing reverently next to one, hand on her heart and hand on an old giant of the forest whose accumulated wisdom of centuries is now accessible for those who listen. She encouraged my client to access this wisdom for yourself. One hand on heart, one hand on the trunk of the fallen tree. Gratitude. Humility. Allow.

This Sprite communicated with my client through her hands. She showed me that she communicates using the meridians of my client’s hands. She asked my client to activate the healing potential of her hands (meridians) and let her assist you as a healer.

Like most fae I’ve met, this Sprite did not use words. Most fae are very feeling based and do not trust words as a clear form of communication. So learn to sense a presence with you. This Sprite spoke and my brain was translating her vibration. She is not human. So this is more telepathy like you would use for animals. This Sprite said she comes and goes when she feels my client needs her or she’s curious about what my client was doing (“humans are weird!”).

I’ve also encountered faery troops out in a field. The field had multiple fairy circles in the grass with mushrooms creating perfect circles. The feeling in the field was absolutely magical. I could feel the presence of these cheeky mischievous fae but couldn’t see them. My husband and I exchanged wide-eyed looks and knew we were both feeling the same thing.

Faery Lore
In the past faeries and humans once worked with and lived side by side. Fairy tales and legends are all that are left that describe these relationships.

Faeries are a universal phenomenon. Faery lore exists from as far away as India to Egypt, Polynesia to Ireland. These cradles of civilisation share a common linguistic root, possibly harking back to an even earlier civilisation. From country to country faeries are similar enough to identify into types. Although geographic differences in cultural clothing occurs their physical appearance remains the same. Each faery type has a distinctive and important part to play in the creation and maintenance of life within the natural world.

As far back as Paracelsus (1493-1541) there was a oral tradition of faery lore, or Elementals as he called them. Paracelsus was a Swiss metaphysician of the 16th century who was a revolutionary in open defiance of medical practice of his day for insisting on using observations of nature rather than looking to ancient texts. Paracelsus was a believer in supernatural things, intuition and the invisible causes of illness. His major work sought to reconcile the art of healing with Christian and Pagan religion, studying the philosophy of spiritual substance. Paracelsus documented the faery lore of his time and categorised faeries into the four types still used today: Earth (Gnomes), Air (Sylphs), Water (Undines) and Fire (Salamanders).

Other sources of faery lore comes from fairy tales and legends that document the faery oral tradition passed down from generation to generation of the region. Faery lore was increasingly concealed as children’s stories to prevent persecution from the Church. The witch hunts of 1450-1750 meant the spirituality and beliefs of the old ways were harshly stamped out, particularly savagely in England but also throughout the British Isles. Faery lore was forced into hiding in order to survive. Just imagine the hundreds, thousands of years of knowledge lost!

Seeing Faeries
Faeries come in many forms. They can be solid, appearing almost human, they can be ephemeral forms of smoky light, they can be simply outwardly projected forms inhabiting the astral plane, they can manifest during meditation or temporarily on the physical plane.

As with all spirit forms, night time is easier to see and feel the presence of faeries. This is when the veil between worlds becomes thinner and easier to penetrate. There are also special occasions like the solstice, equinox or on a full moon where it becomes easier to see faery folk.

The country you live in will have it’s own faeries but if you are descended from immigrants from the UK these faeries will come to you rather than those native to the land. Research the types of faeries and become familiar with where they tend to be seen and how to attract your chosen type.

Respect is important. Approach with humility and gratitude and you will be treated as an honoured guest in their world. Make demands on faeries and you meet with a frosty reception if you see any at all. Tread lightly on the physical and etheric worlds so that you leave no trace.

There is so much we don’t know or understand. I am truly intrigued by this world between worlds. I hope to continue to explore my relationship with faeries both in the astral plane and in nature. I am also curious to understand where all the mythical creatures originate such as unicorns and dragons, gargoyles, succubus and incubus to name a few. I have been blessed with an encounter with a rather talkative abominable snowman in spirit! That was rather mind blowing! Perhaps they are all multidimensional creatures living on another plane of existence that sometimes descend into the material world? This is something I will continue to investigate in spirit and in nature. I’d love to hear of your experiences!

Posted in Elementals and Fae