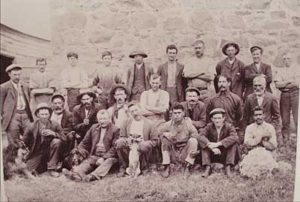 It felt like we’d been hit by an energetic wall of energy. A presence had arrived in the car.

“Did you feel that?” I asked my husband.
“Yeah!” he replied.

I started asking questions, very tentatively at first.
“Hello?”
“Hello!” Came back immediately!
“Who are you?”

And that’s how I met my great, great grandfather!

This was the first dead relative I’d contacted in my family for the purposes of giving him his voice back and allowing him to give his side of the story. His reputation had been shot to pieces!

I had heard about my great, great grandfather – an American from Kentucky! How had he come to be in New Zealand? The only stories passed down were scarce about “useless Eustace” (his real name was Eustace Francis Allen) and really scathing: a drunkard and a no hoper. He was “told where to go” by his mother-in-law Jessie Burgess in 1882 shortly after losing his wife Annie to an abscess. According to the family, he abandoned his three children, leaving them in the care of their grandma, Jessie (known as Granny). That was the last contact between father and children from then on.

Jessie told the family he’d left for the USA and was a reprobate and a drunk. She didn’t mince her words! When mail arrived from USA she’d throw them straight into the fire, unread.

Not only did he lose his wife but also his little family- Frank aged 3, Annie Gypsy 2, and my ancestor, Jessie who was only 8 months old. Their grandma Jessie brought them up along with three of her own.

Jessie sounds like an uncompromising, strict Scottish matriarch. She was also thought to be a local midwife although family stories have confused her with a famous local midwife from the same era who’s name also happened to be Jessie.

Jessie belonged to the local chapter of the Salvation Army and was strongly in favor of the right for women to vote and the abolition of alcohol. Her second marriage, who she married within weeks of her first husband’s demise by drowning, was not a happy one and she brought up her children by herself. That’s about all I know of her.

Sadly, “useless Eustace” died only 131kms away from his children on today’s road system. His youngest, my ancestor Jessie, (named after her granny) was 15 when he died. But she had never tried to find him, believing he’d returned to USA. Devastating. She never learned his true fate, as she was already in her 80’s or 90’s when the family discovered the truth.

My Gran being an avid genealogist (and author of the family’s history) had already compiled a file on Eustace. It included the marriage certificate and death notice of his wife Annie and various scrapes with the law.

Family stories were scathing and harsh of “useless Eustace” who jumped ship in Timaru, was a farm laborer and mistreated his wife and children – why else would he have been so ceremoniously turfed out of the family? But there was nothing to really substantiate any of these claims.

There was only one thing for it. Next time we went to New Zealand we took a road trip to his grave in Kurow. The idea was to connect with his energy there and try to communicate with him. We booked accommodation 15 minutes away in Omarama and set off.

Driving to the Graveyard
We were a good 84kms away, driving through Lindis Pass (a narrow pass that leads to Omarama and on the way to the cemetery at Kurow) when mid-conversation my hubby and I stopped mid-sentence and looked at each other…

It felt like we’d been hit by an energetic wall of energy. A presence had arrived in the car.

And so began a really candid conversation with my great, great American grandfather!

As far as he was concerned, the family stories passed down from what Jessie Burgess said about Frank wee all “cock and bull”!! He refuted that he was an alcoholic (although he readily admitted he liked a drink) and did not mistreat his wife or children.

He believed it was more a cultural divide – he was “different” and did not get on with his mother in law, Jessie. He didn’t believe he deserved the treatment he was given (loosing contact with his kids after losing his wife).

He showed me happy scenes of laughter and dancing, scenes in a tiny bed with him and Annie with a cherub or two squashed in between them. He showed me a baby lost in infancy (not mentioned in the family stories). He showed me him working hard on the land and taking great pride in providing for his family.

I got the impression he still felt estranged from his family and needed to be given a clean slate. 125 years on!

The energy got strongest in some areas then it would fade in other areas. It meant nothing to me at the time so we just made mental notes of the areas that popped.

He explained that these were where he’d worked on “stations” (the name used for the massive farms) for a long time. He told me the last years of his life (last 2 years?) he taught at the Kurow school. He was not registered with the NZ teachers board but he was the most educated person around – he could read and write, teach history and geography, and talk about his home, USA.

He dropped out before we arrived at the Kurow cemetery, which was a shame because there was no sign of him on any of the grave stones. He was obviously in an unmarked grave. My hubby and I used our feels to choose a plot…we were a few meters off the actual grave site!

Frank Comes Calling
That night at the Omarama motel, Frank sat down on my eldest son, Jesse’s bed and waited for Jesse to ask questions! You might remember that Frank’s youngest daughter was named Jessie, (as was Annie’s mother). We named our son after Jessie. Frank wanted to know how he was getting on in his studies. Jesse was confused when he kept asking about his “arithmetic”! A bit of a generation gap there! Poor Frank kept repeating it and getting nowhere. It freaked my son out! It was a bit much for Jesse so he moved in to bed with me.

I also saw Jessie there with him! It was so thrilling to see father and daughter had reunited.

Frank popped in to say hi each night and I was in touch with him from then on.

Finding the Real Frank
In the following year, my mum went into sleuth mode to figure out Frank’s occupations before he married and after he left his family behind. We were on a mission to try to substantiate his claims, to prove my information from Frank…and you know what? My mum discovered something that was absolutely beyond expectation!

First my mum reread the references (found by my Gran) to Frank in a farmer’s diaries from 1866 (he was about 20 years old) setting him up in a tent on the property. The Gould’s were his friends as well as employers. They obviously thought highly of him, inviting him to Sunday lunch often and enjoyed his company if the farm diaries are anything to go by.

But what did he do? Was he just a farm labourer as the family believed? Or was it true he was a private tutor? He was never mentioned regarding crops, harvests, other than neighbourly helping out. He didn’t sound like a paid farm hand. All evidence points toward him being the tutor to what was eventually 13 Gould children in all.

But then my mum made an incredibly exciting find. She found a man whose family history from the Omarama included vivid memories of “Frank, the American tutor.” Oh my goodness!  Suddenly all the information Frank had shared with me about being a private tutor could be proven. I couldn’t believe it!

He described a whole generation of his family having an unusual pronunciation of ‘a’ because of Frank! The family had had a station right where the energy had felt strongest. Not only that, they’d run a pub in the location he’d first arrived into the car with a bang!

The Munro family had a tribe of 13 children to educate. They treated Frank as one of the family and memories of Frank, the American tutor, still linger 125 years on for the Munro descendants! Wow! His family’s reminiscences were full of warmth and respect for Frank.

The Munro family could also tell us why he’d ended up in New Zealand. Frank had enlisted and fought in the American Civil War against his own family. When the war ended what were his options? Return to war ravaged Kentucky and try to mend broken relationships? Or throw caution to the wind and try his luck elsewhere on some far-flung shore? Did he travel first to the Californian gold mines first I wonder before lured south by stories of the New Zealand gold mines?

Giving Frank a Proper Sendoff
The following year we had a proper family ceremony to erect the plaque on Franks grave. We all gathered for a family reunion in Omarama with a ceremony at his newly marked grave the following day.

I was so thrilled to meet Frank and get to know him. We had had the pleasure of getting to know him and had the opportunity to hear his side of things.

Contact Your Ancestor
What patterns lie there that no longer serve you? What parts of your family story no longer resonate with who you are now?

Old family or ancestral stories often come to the surface to be released. These are the stories that created your unconscious and conscious patterns and beliefs. They cannot hold you if you give the energy an outlet to be released.

Some issues may have been carried for generations to the point of feeling rigid and restrictive. You may belief them so wholeheartedly that you forget they are stories you’ve been told.

A generational pattern is a belief, fear, energy, habit, pattern you have inherited from one of your parents. These are patterns passed down parent to child, over and over, generation to generation. Isn’t it tiring just thinking about?!

Even though this isn’t your energy, you’ve been living under it your whole life. So, you’ve had experiences and learning unique to you. You need to unpack those and clear active memories of this energy from your own life so far.

By contacting your ancestors, you can create real and lasting change through your family line. Contacting ancestors and hearing their story in their own words is incredibly healing not only for them but through the generations – past, present and future. It offers confirmation, relief, a deepening understanding and an energetic release of any old trauma or regret.

From the Horse’s Mouth
I offer one on one sessions to meet deceased loved ones and ancestors. I walk you through a process, offering you all my skills to tune in to Spirit for yourself. This is a wondrous and powerful healing that enables your deceased loved one to reconnect with you.

In a session, we:
– Tune in to your body/emotions/mind.
– Call in your deceased loved one.
– Tune in to them to feel what they are experiencing.
– Ask for any messages.
– Ask for any advice they have for you.
– clear and protect your energetic boundaries.

This is an easy technique that you can use in future in the comfort of your own home. It gives you a method and the confidence to connect with your loved one whenever you’d like.

Photo: shearers at Otematata Station, circa 1910.

Posted in Generational Patterns and Past Life