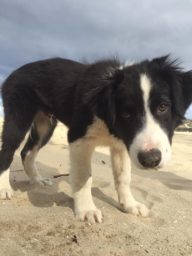 How do you make tough decisions?
Do you look for signs or synchronicities? Gut instinct? Intuitive nudges?

I bet you are wondering what this has to do with the cute puppy photo? All in good time!

I need new spirit guidance to come to me from many different sources before I’ll go with it. I prefer to have strong confirmation that I’m on the right track! Synchronicity is a great way to describe these occurrences. Synchronicity was first explained as a concept by psychiatrist Carl Jung, as early as the 1920’s. Jung maintained that events are “meaningful coincidences” if they occur with no causal relationship, yet seem to be meaningfully related.

I believe there’s no such thing as coincidence or chance. So when a coincidence occurs in my life I know it’s really synchronicity. I know there’s more going on than meets the eye so I pay attention and observe to try to understand what my spirit guides are trying to tell me.

Synchronicity occurs when your inner and outer worlds align. I believe everything is interconnected; we live in a web of life that creates ease and flow for all those living in oneness. Everything is energy.

When you experience synchronicity in your life it is validation and confirmation you are on the right path. Everything feels like it’s unfolding without conscious effort on your part. You may feel like you’re held in the hand of universe/Source/God who is actively assisting you.

God, (the universe, Source) via your spirit guides only teach us one step at a time. We receive this information in the form of repetitive thoughts (or feelings, visions, or words, depending upon your spiritual orientation) that tells us to do something.

Sometimes spirit guidance is subtle and easily missed if you aren’t paying attention, but when it really matters it’s repetitive and obvious – they don’t want you to miss it! Your spirit guides have your highest and best good in kind so if it’s important they will not rest until you have understood the message.

Last week one of my sons turned 12. Asher was given the choice of buying a puppy. Some would think that with a cat, 3 rabbits and 2 dogs already we’d have more tan enough fur babies!! But we have an elderly 12 year old Airedale terrier, Solly (aka Solomon- he’s not the smartest but a gentle giant) and a young 3 year old red and white border collie, Foxie (who runs rings around Solly and could do the boy’s homework if only she had opposable thumbs!). Foxie won’t exercise unless she has someone to run with – preferably someone who can keep up! So we’ve been debating for a year now whether to get another border collie.

Ash went on the local buy/sell website, Gumtree, and chose black and white border collie puppy from a litter of 6 in a terrible photo:

With 6 puppies on offer I didn’t hold out much hope he’d pick that particular one but made contact with the owner. It turned out the owner and the puppy’s father lives only a few minutes away (the puppies were with their mother, a working dog, on a farm 1 1/2 hours away). So we visited the father to get a feel for the personality the puppies would inherit. The father was an incredibly gentle, placid, contented border collie. It boded well.

In conversation with the owner, however, we discovered that the mother was actually the same mother as Foxie! We had the opportunity to meet Foxie’s mum for the first time! So exciting! This was an amazing coincidence and the first nudge from the universe that we were on the right track. Between Foxie’s litter and this one Foxie’s mum, Ruby had been bought and moved farms.

The next day we drive out to the farm. It was a big deal for Ash so we tried to downplay it by saying we’d just go meet Foxie’s mum and it didn’t matter if he didn’t find a puppy he fell in love with. Driving into the town we passed ‘Ash Cottage’ so a second heads up from the universe that we were doing the right thing by Ash and in the right place for a puppy!

Foxie’s mum was lovely – so unlike her daughter! Foxie is very high maintenance needy, clingy and always on the ready to ‘work’, but we love her all the same. Foxie’s mum was gentle and affectionate and so chilled.

The puppies were a bit overwhelming – at 13 weeks old they were a rolling ball of puppy exuberance that didn’t stay still long enough!! The farmer picked up the two females but we knew they weren’t the one. My hubby asked to see the puppy who was chasing Foxie around. She picked him up and we all melted. He was GORGEOUS! He had deep chocolate pools for eyes, a fluffy coat and was affectionate and immediately relaxed in the farmer’s arms.

Ash had a sob -he felt so overwhelmed. Choosing a forever fur buddy is no mean feat – it’s a 10-15 year relationship!! We eventually chose the name Shiloh. It’s a Hebrew name meaning ‘the one to whom it belongs’. In the Bible Shiloh means peace, abundance and is the name of a city.

So far he’s an absolute delight. Aside from the usual toilet training mishaps and vomiting when carsick, he’s been the calmest, least excitable puppy. At the weekend he had his first walk on a busy beach on a dog off-lead beach. Imagine a beach with dogs running full tilt in every direction, in packs and solo, through water and up and down the stretch of beach. Some dogs are better behaved than others, so there’s always a fair bit of barking and shouting involved! Shiloh’s instincts kicked in and we didn’t need to teach him anything. He walked happily on his lead, didn’t run off when he was released and stayed with us the whole time!! Most surprising, he even checked in with every member of the family and took all the sights and sounds in his stride. Wow. He’s so lovely!!

Ok. There’s a third and final uncanny fluke we only discovered days later. Ash was looking at the original Gumtree photo and realised he’s chosen the same puppy – the one he’d had his heart set on!! Yes, of course you did Ash!

With all the synchronicities along the way, we aren’t surprised Ash chose such an amazing puppy. It’s just how things pan out when you follow your guidance.