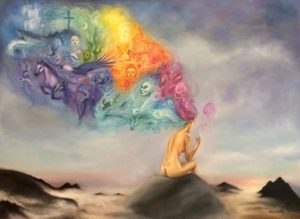 “Beloved, you are come to me! I have waited long and hard for this moment.

And yet you doubt. You doubt that you can hear or see me. You doubt my very existence!

You doubt that you can connect with me just as easily as this! It has been built up in your imagination as something insurmountable that only a precious few can do. And yet you can! Yes, you can!

Do you not see that the active imagination is merely a form of spirit work?

Do you not see that it is through this medium that you can traverse the astral planes and commune with all of us who dwell there? It is not another place. It is here, right here.

It is just that we do not share the same vibration. We are on a different frequency to you most often. It is like saying that you cannot hear the radio waves (that are flowing through the air all around you!) and so they don’t exist! But they do! You just need a special instrument to receive them on the same frequency.”

Last week I conducted a Tune In Session with a lovely gentleman in the UK. In a Tune In Session I work one on one to assist you to tune in to your own truth and transform whatever is coming up in your life. No matter what the situation might be, you are offered a higher perspective of what is going on and practical steps to navigate your life in this moment.

This gentleman needed to have a cord cutting to release a toxic, dysfunctional relationship triangle that was disrupting his life – and his sanity! A cord cutting is beneficial for all involved. This is a powerful healing that releases you from unhealthy, toxic or dysfunctional relationships. A cord cutting is a gentle, loving process to release any people or relationships that no longer serve your highest good or the highest good of all. It liberates you from old outmoded patterns or beliefs, freeing up your energy.

I guided and supported this lovely man through the process, allowing him to be in charge; reporting what he saw, heard and felt. It’s an incredibly empowering to have a mentor to support you but relying on your own intuitive gifts.

Throughout the cord cutting this lovely gentleman kept qualifying everything with “its just my imagination” and not wanting to share what he saw and felt – for fear he was making it all up!

Ah we’ve all been there! It’s so hard to trust! So many believe that they can’t speak directly to Spirit. So, they can’t. It’s a wish fulfilling prophesy!

So, what is the difference between an over-active imagination, a day dream or hallucination and your intuition?

Is there a difference between imagination, hallucination and clairvoyance?

We tend to believe that using your imagination is different to clairvoyance. Personally, I believe these two share much in common.

So, What Is Intuition?

Intuitive gifts are the psychic abilities used to receive intuitive guidance. Intuition is the most common form of spiritual guidance. Spirit guides rely on intuition to help show you opportunities as they arise.

Intuition exists in all of us whether we are aware of it or not. Your logical mind really only reveals a fraction of the truth of any given situation. Intuition can come in the form of a small, quiet voice inside that tells you the truth of an external situation, event, person or the truth of who you truly are.

We are all born with the same innate abilities. If your parents were aware of their own intuitive abilities they probably acknowledged yours as a child. If your parents were unaware they may have ridiculed or discounted your intuition, causing you to shut them down by the age of eight. Often these gifts are forgotten so it takes practice to remember how to tune in.

Clairvoyance is the ability to see spirit in mind’s eye. If you have an activated pineal gland, also known as your third eye, you’ll be blessed with detailed sight or visions of Spirit and spiritual beings. Of course, these are symbolic and need to be interpreted – Spirit is not a physical environment and spiritual beings are essentially formless! Visions offer messages through metaphors or images that require interpretation. Your spirit guides will speak to you in word pictures, using a physical environment to convey volumes of information relatively easily.

Imagination, on the other hand, is defined as the faculty or action of forming new ideas, or images or concepts of external objects not present to the senses. Imagination is an ability of the mind to be creative or resourceful. It originates from the part of the mind that imagines things.

For me there’s a conscious filtering of information that’s clearly involved when using my imagination. I can feel the cogs moving and conjuring when I’m using my imagination, whereas when I’m using clairvoyance there’s a sense of detachment and a surrender to a conscious beyond brain function. The hardest part of trusting that you’ve switched to clairvoyance is the surrendering the rational side of the brain and allowing whatever comes through. I tend to chant “just accept the first thing that pops into your mind”. This is the best way to access clairvoyance – before your brain gets involved and tries to take command of the process or filter your visions.

Surrendering the conscious rational part of the brain is not easy!

So often what is not understood, what is esoteric or difficult to interpret is discounted as a hallucination, a fabrication or all in your head. Somehow, we’ve been fooled to believing that if it can’t be seen (and preferably proven by science!) then it can’t exist. Whatever isn’t understood or accepted in our society is deemed false.

At the end of our session the gentleman was genuinely moved and his whole perspective on the relationship seemed to have shifted. I felt like he understood that what he’d been disparagingly treating as “just my imagination” was actually an intuitive gift he’d had all along. He described feeling a shift taking place in the souls of the others he’d conducting the cord cutting with and his feeling that he felt understood and now fully understood their perspectives also.

In 2009, Dr. Alvaro Pascual-Leone ran a study where he had a group of people learn to play a simple melody on the piano. He split them up into two groups.

During the whole study, Dr. Pascual-Leone was mapping the brain activity of all the participants before, during and after the experiment.

The results were shocking. He found the same exact brain changes happened in both groups. This meant that the brains of the people who only imagined playing the piano changed in a way as if they were really playing it.

What does this mean?

Our brains do not know the difference between imagination and reality.

Truth is stranger than fiction. You just can’t make this stuff up!

Just stop a moment and tune in to what your intuition is trying to show you. Be open and pay attention but most importantly, acknowledge that Spirit is sending you a message. Anything that pops, that draws your attention, is worth becoming consciously aware of. Take notice then tune in to understand the message being offered by Spirit. You won’t always understand the message until much later. What’s important is your conscious awareness of the sign from Spirit and acting on anything that is called for.

Fire up the Imagination!

Just remember that Spirit will always use your strengths to your advantage. Your spirit guides want to communicate with you and will use everything in their power to get their message through. This includes a natural persuasion to day dream and drift off into their own world! Keep that in mind next time you’re startled back to reality and out of your reverie!

Use your vivid, over-active imagination! This is a strength that can work to your advantage! Recover its value as an innate gift that can enhance your ability to see Spirit in all its incredible detail!